Transportation of the launch vehicle to the launch pad. Baikonur Cosmodrome. 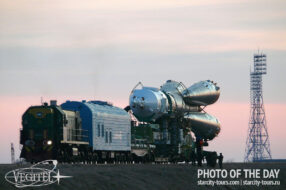 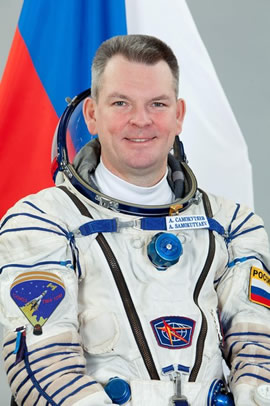 In 1992 be graduated from Chernigov Higher Military Pilot School after Lenin’s Komsomol (HMPS).

In 1992-1998 he served at Chernigov HMPS, helicopter school in the Ukraine, the Far East military district where be was assigned to a post of the squadron leader.

Upon graduation from the Academy since 2000 he served at Yu.A. Gagarin Cosmonaut Training Center as the planning division head.
On January 20, 2003 he got a positive medical comment (permission to special training) at the meeting of Chief Medical Board (CMB).

On May 29, 2003 at the meeting of the Interdepartmental Commission for the cosmonaut selection he was enlisted in the cosmonaut detachment to pass a course of general space training.

From June 16, 2003 he began general space training he finished on June 27, 2005 having passed graduation examinations with an excellent mark.

On July 5, 2005 by decision of Interdepartmental Qualification Committee (IDQC) he was qualified as a test cosmonaut.

In July 2008 it was reported that he was assigned to the backup crew for Expedition 25 to the ISS (ISS-25). At the meeting of the Chief Medical Board on February 10, 2009 he got permission to train within the Soyuz-TMA vehicle backup crew.

On March 11-12, 2010 at the Cosmonaut Training Center Samokutiaev together with Andrei Borisenko and NASA astronaut Scott Kelly passed preflight examinations with good and excellent marks.

During the launch of Soyuz TMA-18 TV on April 2, 2010 he was a backup of the vehicle commander.

At the meeting of the Interdepartmental Commission for the selection of cosmonauts and their assignment to the manned vehicles and stations crews on April 26, 2010 Samokutiaev was qualified as a cosmonaut of Yu.A. Gagarin CTC detachment.

In September 2012 Aleksandr Samokutyaev changed Dmitry Kondratiev as commander of the prime crew of Soyuz TMA under ISS-41/42 program (Elena Serova and Barry Wilmore were flight engineers). On January 16, 2013 by Order of Gagarin CTC Head he was assigned as Head of the cosmonaut candidates team. In January 2013 Aleksandr Samokutyaev together with Elena Serova and Barry Wilmore successfully passed training in the forest near Moscow for measures taken upon landing in the wooded/marshy locality in winter for 48 hours.

From March 4, 2014 he passed training as commander of the ISS-39/40 backup crew together with flight engineers Elena Serova and Barry Wilmore.

On March 24, 2014 at the meeting of the State Commission at the Baikonur cosmodrome Samokutyaev was approved as commander of the Soyuz TMA-12M MTV backup crew.