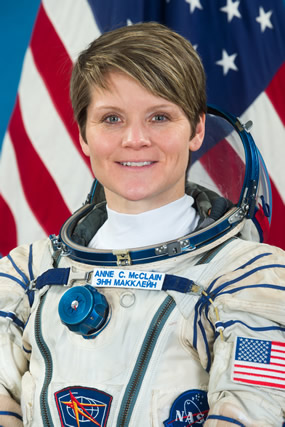 Born and raised in Spokane, Washington. Mother and stepfather are Don and Charlotte Lamp and stepmother is Mari Ann McClain, father is the late James McClain, all of Spokane, WA. She enjoys weightlifting, rugby, golf, biking and running.

Graduated from Gonzaga Preparatory School in Spokane, Washington, in 1997.

Earned a Bachelor of Science in Mechanical/Aeronautical Engineering from the U.S. Military Academy at West Point in 2002.

A 2002 Marshall Scholar, earned a Master of Science degree in Aerospace Engineering from the University of Bath in Bath, England in 2004.

Earned a Master of Science in International Relations from the University of Bristol in Bristol, England in 2005.

McClain was commissioned as an Army officer in 2002 and immediately attended graduate school. Her studies at the University of Bath focused on the unsteady aerodynamics and flow visualization of free-to-roll nonslender delta wings and her research was later published through the American Institute of Aeronautics and Astronautics (AIAA). She concurrently researched the security burden in developing countries at nearby University of Bristol.

In 2009, she attended the Aviation Captain’s Career Course and was then assigned to 1st Battalion, 14th Aviation Regiment at Fort Rucker as the battalion operations officer and OH-58D instructor.

She completed Command and General Staff College and the C-12 fixed wing multiengine qualification courses in 2011 and 2012.

She then attended the U.S. Naval Test Pilot School, graduating with Class 143 in June 2013 at the same time she was selected as a NASA astronaut candidate.

Major McClain is a Senior Army Aviator and has logged more than 2,000 flight hours in 20 different rotary and fixed-wing aircraft. She is a rated pilot and instructor pilot in the OH-58D Kiowa Warrior and a rated pilot in the C-12 Huron (King Air), UH-60 Blackhawk, and UH-72 Lakota.

McClain was selected in June 2013 as one of eight members of the 21st NASA astronaut class.

From June till December 2017 passed training course in the Star City (Russia) as a member of ISS- 58/59 backup crew.

Graduated with distinction from the University of Bristol (2005).