Take your seat in the cockpit of the L-39 Albatros jet! 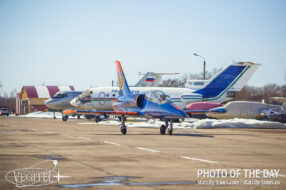 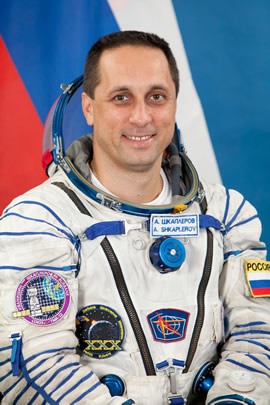 From 1989 to 1992 he studied at Chernigov Higher Military Pilot School (HMPS).

In 1994 he graduated from Kachinsk Higher Military Pilot School with honours diploma.

Since 2006 he studied at the Russian Government Service Academy at the President of the Russian Federation specializing in jurisdiction.

Since 1998 he was a senior pilot-instructor of pilot group Sky Hussars of Aircraft Engineering Exhibition Center (AEEC), Air Forces, then – the Air Forces aviation regiment squadron commander, Kubinka, Moscow Region. He flew aircraft L-39 and MiG-29.
Shkaplerov made more than 300 parachute jumps, is an instructor of parachute assault service.

By Order of the Russian Federation Defence Minister in September 2012 he retired from Armed Forces (AF).

On May 29, 2003 by decision of the Interdepartmental Committee for the cosmonaut selection he was enlisted in the cosmonaut detachment to pass general space training (GST).

From June 16, 2003 to June 28, 2005 he passed a course of general space training and on July 5, 2005 by decision of the Interdepartmental Qualification Committee he was qualified as a test cosmonaut.

In July 2008 it was reported that he was assigned to the backup crew of Expedition 22 to the ISS. On September 21, 2008 his assignment was confirmed in the ISS flight plan published by Roscosmos press-service.

In November 2009 he passed a clinical & physiological examination and at the meeting of the Chief Medical Board on November 19 he was recognized as fit for a spaceflight. On December 19, 2009 by the Interdepartmental Commission Shkaplerov was approved as the backup crew commander of the Soyuz TMA-17 vehicle and a member of the ISS prime crews 22/23.

During the launch of Soyuz TMA-17 TV on December 21, 2009 he was a backup of the vehicle commander.

At a period of January 20 to February 2, 2010 Shkaplerov as a member of the preliminary crew together with Anatoliy Ivanishin and Daniel Burbank participated in a two-day training for survival in the deserted area in case of emergency landing of the descent vehicle. These trainings were provided in the forest near Moscow.

At the meeting of the Interdepartmental Commission for the selection of cosmonauts and their assignment to the manned vehicles and station crews on April 26, 2010 he was qualified as a cosmonaut of Yu.A. Gagarin CTC detachment.

On March 4, 2011 at the Cosmonaut Training Center he together with Anatoliy Ivanishin and Daniel Burbank passed the examination training on the Soyuz TMA simulator. On March 5, 2011 the crew passed the preflight examination training on the ISS Russian Segment. The Commission of the Cosmonaut Training Center appreciated the crew operation during the integrated two-day training with an excellent mark.

During the launch of the Soyuz TMA-21 TV on April 4, 2011 Shkaplerov was a backup of the vehicle commander.

On December 20, 2012 by decision of the Interdepartmental Commission (IDC) he was assigned to the prime crew of ISS-42/43 Expedition and the backup crew of ISS-40/41. The American party identified the remaining crew members: Samantha Cristoforetti (ESA) and Terry Virts (NASA). On January 31 – February 1, 2013 Shkaplerov together with Terry Virts and CTC instructor Sergei Gerasimenko successfully passed training in the forest near Moscow to test actions after landing in the wooded-marshy locality in winter for 48 hours.

On May 6, 2014 Shkaplerov began to pass the integrated training as commander of the ISS-40/41 backup crew together with flight engineers Samantha Cristoforetti and Terry Virts. On May 6, 2014 the examination training was provided on the Soyuz TMA simulator with an excellent mark. On May 7 the crew passed the test training on the ISS Russian Segment with such a mark as 4.5.