The original feeling of flying — only in Zero-Gravity flight abroad IL-76MDK plane! 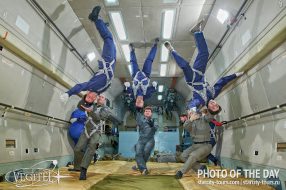 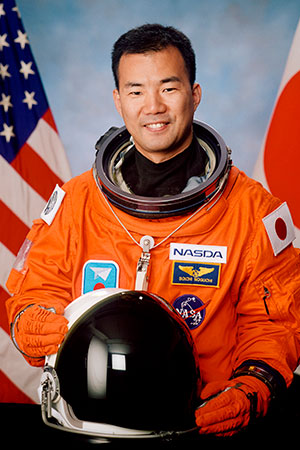 He was selected as an astronaut candidate by the National Space Development Agency of Japan (NASDA, currently Japan Aerospace Exploration Agency) in May 1996 and joined NASDA in June 1996. He completed two years of Astronaut Candidate Training at NASA’s Johnson Space Center (JSC), and was qualified for flight assignments aboard the space shuttle as a Mission Specialist (MS) in April 1998. He participated in basic training for Russian manned space systems at the Gagarin Cosmonaut Training Center (GCTC) in Russia in 1998. He then continued MS advanced training at JSC while working on the Japanese Experiment Module (JEM) development tests.

The STS-114 mission by the space shuttle Discovery (July 26-August 9, 2005) was the Return to Flight mission during which the space shuttle docked with the International Space Station (ISS) and new procedures for flight safety, space shuttle’s orbiter inspection and repair techniques were tested and evaluated. He conducted three Extravehicular Activities (EVAs) as a lead spacewalker (EV1) and became the first Japanese astronaut to perform EVAs on the ISS. During the spacewalks, he demonstrated in-flight repair techniques on shuttle’s Thermal Protection System (TPS) tiles, replaced a failed Control Moment Gyro (CMG) with a new CMG, and installed External Stowage Platform-2 (ESP-2) on the ISS. He accumulated 20 hours and 5 minutes of spacewalk time in three EVAs.

In February 2007, Noguchi was assigned as a back-up crew member for the ISS Expedition 18 mission.

In December 2009, as the first Japanese left-seater for the Soyuz spacecraft, Noguchi was launched to the ISS aboard the Soyuz TMA-17 (21S) from the Baikonur Cosmodrome in Kazakhstan. He spent 161 days aboard the ISS as a Flight Engineer for the Expedition 22/23 Mission, and returned to Earth in June 2010 (in this mission, he logged a total of 163 days 5 hours 33 minutes in space including flight time between the ground and the ISS).

During his stay aboard the ISS, his fellow JAXA astronaut Naoko Yamazaki arrived at the ISS on the STS-131 (19A) mission. This was the first time that two Japanese astronauts worked together in space at the same time.

He was assigned as the Chief of JAXA Astronaut Group from August 2012 to April 2016.

In July 2019, he was released from his backup crew assignment for Soyuz 59S with its successful launch, is now slated to begin training to board a United States Crew Vehicle (USCV) while he continues to train for an ISS expedition crew.